Home about us Your Inquiry / Order
Empty basket. General Terms 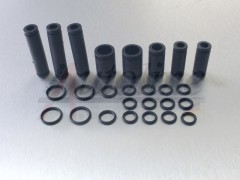 To fit for
VW/Audi

Info
8 pressure oil pipes which have to be removed to separate main and clutch housing. These tubes are easily damaged during dismantling.

These products have been produced exclusively for AUTOLINE.

not included are the two tubes which are fixed in the valve body - they can be removed only if the valve body will be disassembled. These two tubes are normally not damaged during repair. The o-rings are part of the sub-kit mentioned above.